The first Queer Disco in Cardiff since 2012 will be at the Red and Black Umbrella! 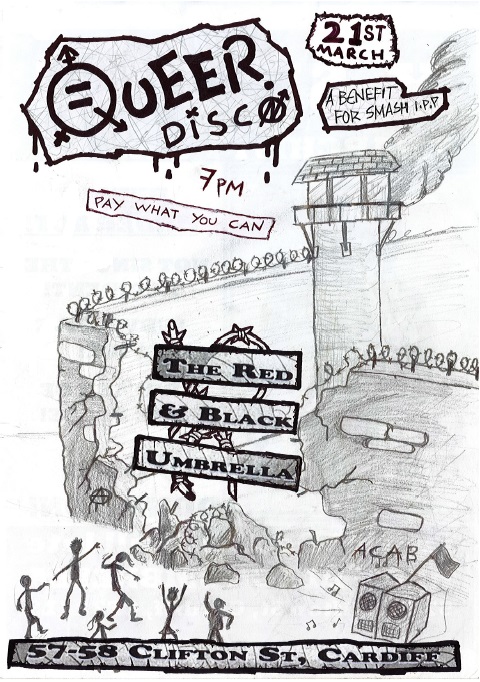 Raising money for Smash IPP campaign. Pay what you can on the door. 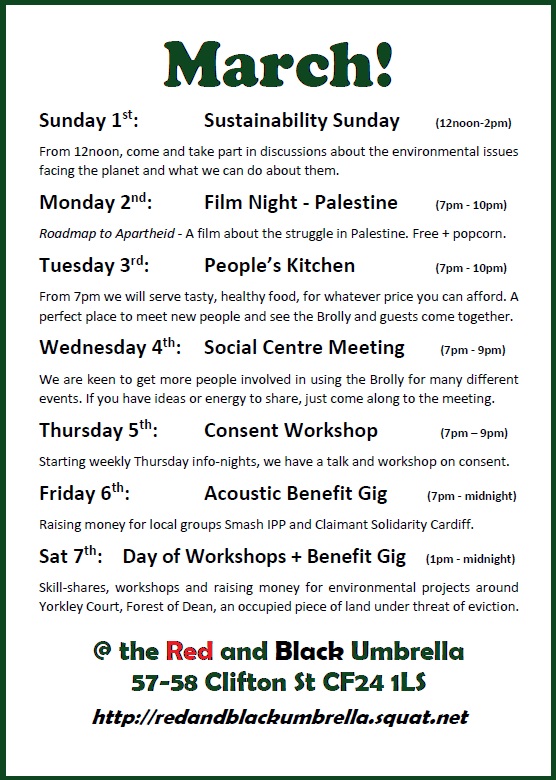 So, basically, Charlie has a deformed leg, and if it isn’t operated on then he could develop arthritis and lots of pain. The PDSA can’t do the operation because they don’t have the necessary specialist or enough money for corrective surgery, so this gig is to help.

*HOWL – Banging Hard Stoner Rock from Cardiff -
‘If Rock and Roll were loins, Howl would be it’s fruit’

*CHARLIE – The coolest and cheekiest dog in Cardiff, all the way from the harsh streets of Spain. Bigger and badder than ever, he’s literally growing all time. He’ll be on the door, looking fabulous.

Followed by an OPEN MIC session

This event is covered by the Red and Black Umbrella’s new safer spaces policy, in short, this means that people should people treat each other with mutual respect. Respect each others boundaries and personal space. Be aware of the range of different identities (genders, races, sexualities, class etc.) that people may identify with and respect them. Anyone being abusive may be asked to leave.

£4 Suggested donation. Give what you can, no one will be refused for lack of funds.

There’s also a page online for donations, check it out at: http://www.gofundme.com/4knq1c 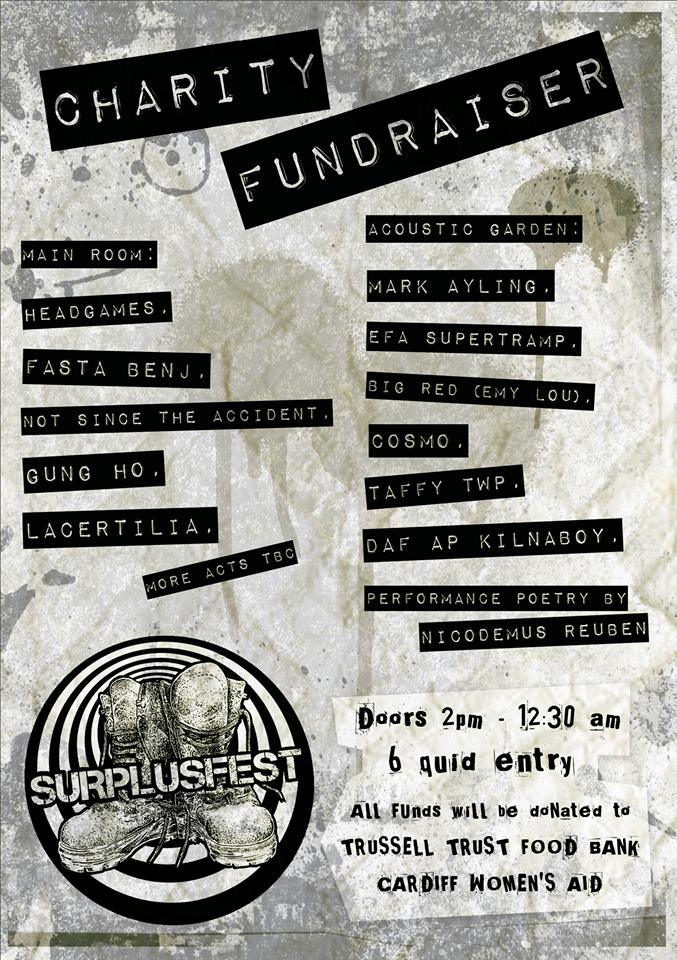 Surplus Charity Fundraiser Part 1
SurplusFest are holding a fundraiser for two local Cardiff charities. To raise much needed funds for Cardiff Foodbank and Cardiff Women’s Aid. All money raided will go to the organisations.
Please come and support the event, round the corner from us, where Broadway meets Newport Road.”This is a family friendly event and we welcome everyone to come and join in.

We have a circus workshop in the afternoon where you’ll be able to learn new circus skills including poi, juggling, hoopla and many more skills…..

PLUS lush munch from the lovely FOOD NOT BOMBS!

Plus a BBQ selling Burgers and Hotdogs

We also have someone coming down to do some Henna for the afternoon and a fire show in evening. 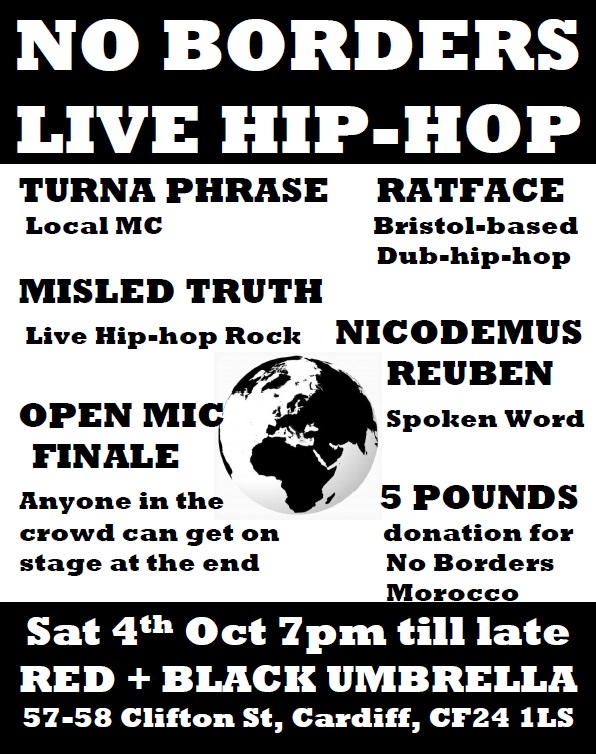 Benefit gig at the Red and Black Umbrella for No Borders Morocco.

£5 donation welcomed for the struggle on the border.

Come to our benefit gig to help us make it happen…

Rash Decision also contacted but yet to confirm.

All money raised to go towards fixing the (at least) 3 year-old hole in the roof…!

(The roof is above the lived-in part of the Red and Black Umbrella building, but money has always been tied together.) 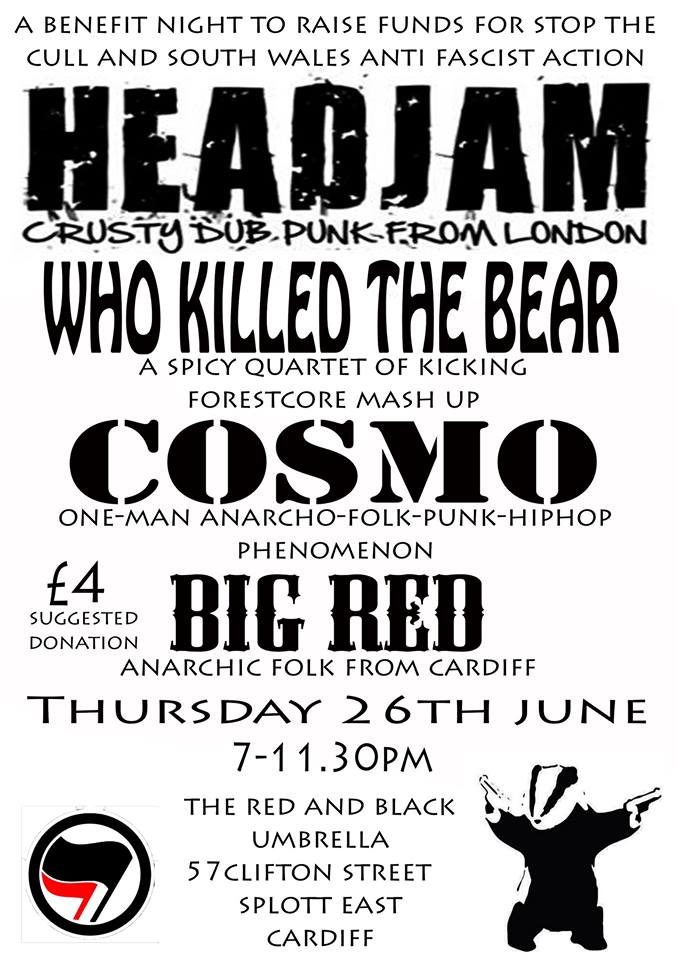 This Friday at The Red and Black Umbrella we welcome back old favourites Grand Collapse  the night before their ALBUM RELEASE in Bristol. Also playing will be Punk all the way from Dublin- Dropping Bombs!

Some info about what Fracking means to you, and what can be done to help end the disastrous destruction of our environments: http://frack-off.org.uk/fracking-hell/frontline/

We welcome back Bristol Antifa skacore punks Atterkop back through our doors with special guests, Dead City Riot- Hardcore ska all the way from the USA, on the first day of their European tour!
Also playing will be Chewed Up and Public Order act, so don’t miss out

Atterkop- http://www.riotskarecords.com
2014 will see them continue to tour while fundraising for causes close to their hearts.
Atterkop have one simple goal, to make music for social change not fashion or profit.

DEAD CITY RIOT EUROPEAN TOUR 2014 -
http://riotskarecords.bandcamp.com/album/before-the-dawn-ep-re-release
The “anarcho punk/skacore” force to be reckoned with, DEAD CITY RIOT, hailing from Connecticut, USA are heading back to Europe for the second time this year. On this occasion they will be armed with a full length record and a shed load of new tunes.

Chewed Up – http://www.chewedup.co.uk
A DIY Anarcho-ska project from Sheffield. Bits of Choking Victim hammered together with bits of UK82, 80s Crust. and US 80s HC.
Played with the likes of Discharge, Subhumans, Dogsflesh, Morning Glory, Restarts, Barb Wire Dolls and many more.

Suggested donation of 3quid
Profits split between South Wales Antifa and The RBU Social Centre funds-
Give what you can!

The RBU is excited to announce that KilnAboy will be launching their new album Prison Bars and Battle Scars with us – in ‘The Den’, with very special guests Firepit Collective!

Also the night features the return to the RBU of …Spanner and …Taffy Twp!

Suggested donation £5 with any money made going to the recent SWAFA demo in Swansea.

Support you local antifa & get down on the 9th to see these folks! L&r x 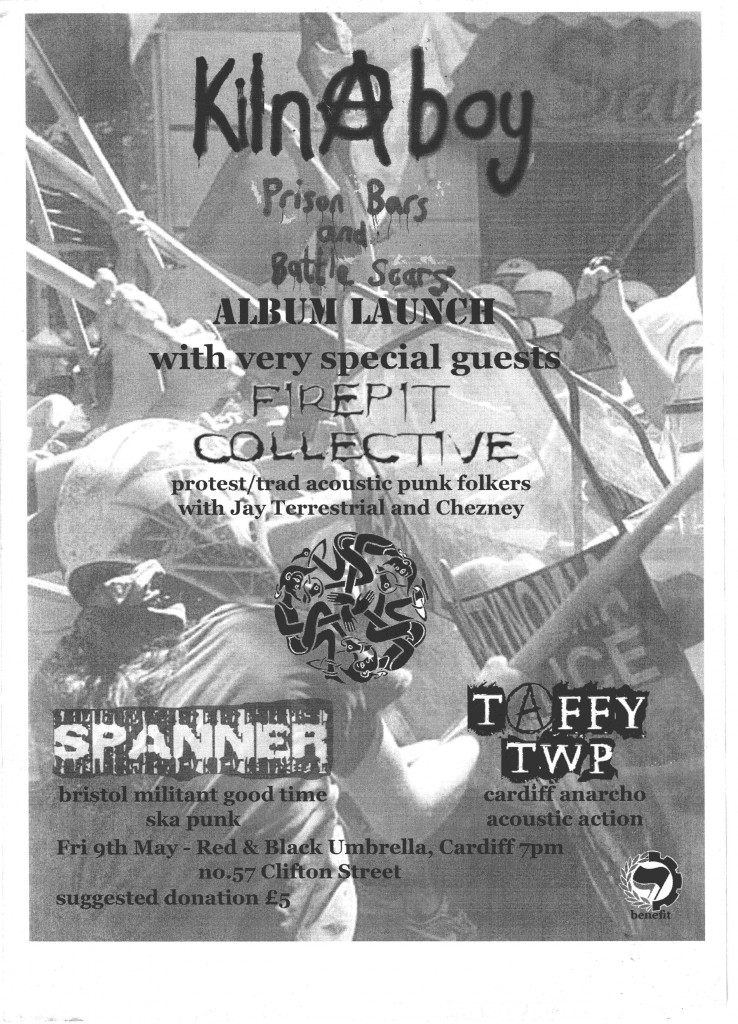