An effigy of US president Barack Obama was burnt in Bute Park on Saturday 30th August. The action was organised by a group calling itself ‘Cardiff Anarchists, Travellers, Squatters and Homeless Individuals Together’ (…what others might instead call the Cardiff Squatters Network) and was attended by around 40 local young people.

This symbolic action came just days before the real Obama was due to attend an official dinner at Cardiff Castle.

The effigy was first put on trial by activists in fancy dress. The prosecution accused Obama of a list of war crimes, citing children killed by drone strikes in Afghanistan and other countries. A man with devil horns acted as the president’s defence lawyer and attempted to convince the court that the accused was just a “lovable rogue”.

“Boys will be boys, and presidents will be presidents. What’s a little bit of cheeky genocide between friends?” he said. “Who here hasn’t committed a war crime?”

A guilty verdict was returned by the raucous audience, and the judge broke her gavel trying to call the court to order. The effigy was sentenced to death by electrocution, and a colander was placed on its head. 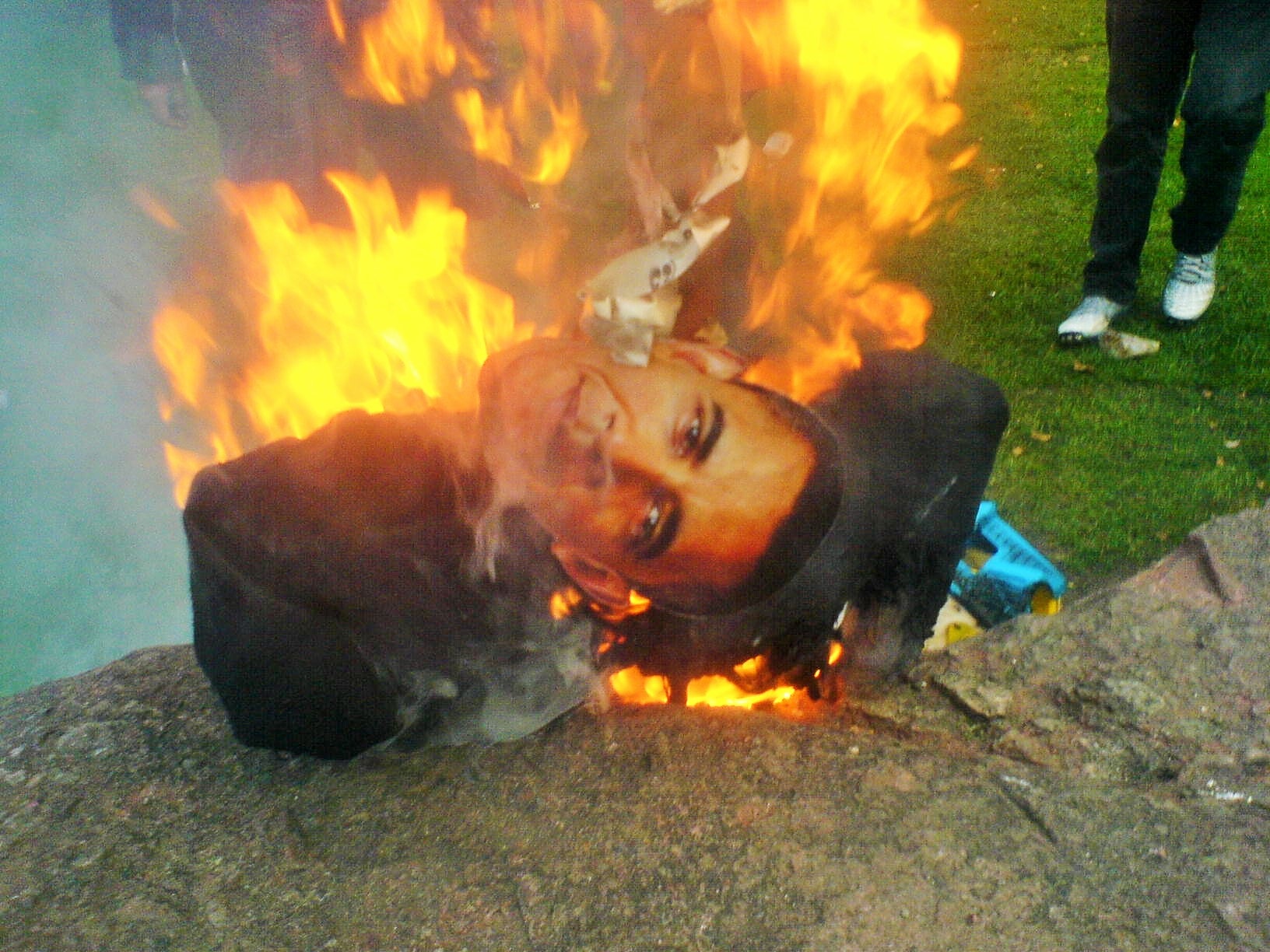 However, the crowd had other ideas and quickly set fire to the dummy. As the flames engulfed it
a police officer arrived and people quickly dispersed.

“We didn’t plan to burn the president, but the play took on a life of its own,” said Anon Davies, one of the activists. “The crowd were really engaged, there was a real sense of unity. They were all laughing along and just started shouting “burn him!” Next thing you knew, half of them had their lighters out.”

Less than a week later the real Barack Obama joined other world leaders at Celtic Manor resort in Newport for an international NATO conference. Local activists argue that NATO fights
aggressive wars to maintain western control over oil and other natural resources. They argue that the UK spends billions of pounds on NATO annually and this would be better spent on public services.

Obama is currently facing opposition at home over his controversial signing of the unpopular NDAA Act. This law allows the president to deploy troops on US soil, and to assassinate any American without trial. There is now a cross-party action in the US Senate, to impeach him for High Treason.

“It’s been horrible to see Cardiff under lockdown like this,” said Ceri Williams, who was in the audience in the park. “There have been police with assault rifles in the city centre, and army helicopters flying overhead. The play was fun. It just made the rest of it look completely ridiculous, to be honest.”

We’d like to let you know about the first of many new community Jumble Sales organised after a long break by South Wales Anarchists.

Anarchists organising Jumble Sales?? Well, we disapprove of waste, and love community, so why not!?

Here’s a link to police-trace-book for more information:

Hope to see you at our friend’s at the Wells on Tuesday! & film showing of On the Verge at 7:30pm!

Hi everyone, Roo here with a heads up on an upcoming gig…

Doors open @ 17:30 with a suggested donation of three pounds

(nobody will be turned away for being skint, but this *is* for a good cause and they deserve the money)

Watch this space for news of another gig a week later on 22nd March!

For more information on Stop NATO Cymru, please see below: